The symptoms and treatment of cancer of the bronchi

Serious cancer is cancer of the bronchi, symptoms which depend on the stage of the disease. Bronchi is a well-developed branches of the windpipe, which continue inside the bronchi. From each main bronchus secondary depart, which are divided into even smaller branches. This system is called the “bronchial tree.”

The causes of pathology 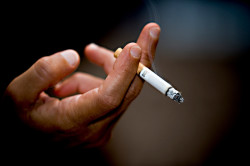 Cancer occurs when a malignant degeneration of the tissue of the bronchi. Scientists proved that the most common cause, contributing to the development of malignant tumors is Smoking. Nicotine affects the mucous membranes of the bronchi and the lungs and also triggers the release of large amounts of mucus. Epithelial cilia, which are located in the bronchi and to cleanse the respiratory tract, are not able to do it, as covered with mucus. Consequently different particles penetrating the respiratory process of inhalation, are deposited on the bronchi, contributing to the development of malignant tumors.

Other causes that increase the risk of developing the disease: radiation, constant contact with chemicals, asbestos, volatile substances, work in mines, cement and glass plants, chronic pneumonia or bronchitis, bronchiectasis, scarring in the lung after suffering tuberculosis. 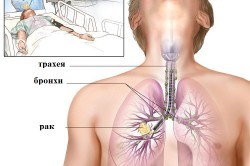 Clinical manifestations of cancer of the bronchi depends on the degree of its development, the size of the affected bronchus and the individual condition of the patient. There are 4 stages of tumor development.

A malignant tumor can cause different symptoms, whenthe discovery that a doctor's consultation. Here are the main ones: 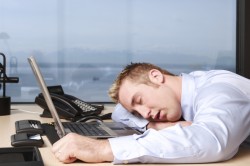 Upon detection of the symptoms listed above should immediately contact the doctor.

To accurately diagnose cancer of the bronchi, it is necessary to conduct CT (computed tomography) and x-ray examination. For confirmation of the diagnosis requires histological examination of a bronchial tissue sample that is taken during bronchoscopy (direct examination of the bronchial tree using a special instrument, an endoscope). When detected in the tissues of cancer cells, the exact diagnosis. The presence of cancer cells will also be tested sputum, swabs from the surface of the tumor. 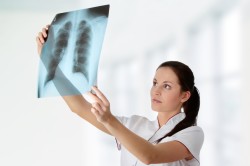 To study the stages of cancer, destruction of the body and spread of metastasis need additional treatment: 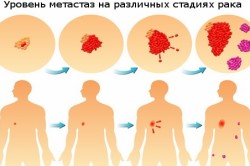 The projections for cancer of the bronchus, depending on the time of diagnosis: the earlier was diagnosed with a disease, the higher the chances of survival.

Cancer treatment is to remove surgically a malignant tumor, one or more affected lobes of the lung (lobectomy and bilobectomy) or entire lung (pneumonectomy). This is the most effective, but very complex method, so you need to consult a qualified surgeon. The operation is accompanied by a set of pre - and post-operative procedures. 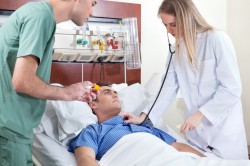 With the development of metastasis is a complex anticancer treatment, which consists in the following methods:

The operation is not carried out:

To reduce the risk of cancer of the bronchi should adhere to the following measures:

In addition, you must observe safety precautions, using protective equipment in hazardous industries, for example, when working with chemicals, asbestos, or in the mines.